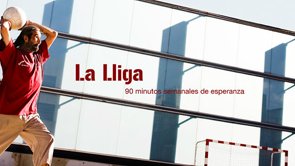 In 2010, OTOXO made a film called ‘La Lliga’, about a football league which was set up for homeless drug addicts and alcoholics of the Raval district of Barcelona. For 90 minutes a week on a concrete pitch, the players of La Lliga got the chance simply to be somebody; to play a part in a team; to be valued and to value others. For some it may have been little more than a welcome break in the weary monotony of their lives on the street. But for others, this league offered a real chance – structure, responsibility, a stepping-stone to finding a roof and a job. For everyone, it was a time of hope.

And the hope continues. What started as an experimental neighbourhood kickabout has grown into a citywide project, connecting various charities and numerous participants, and as it enters its fifth year OTOXO is going back.

‘La Lliga: 5 Years On’ will witness a new set of competitors who have been left on the sidelines of society. A different line up, the same torrid struggles and simple dreams. The joy and unity of the pitch, and the blunt reality off it. 90 euphoric, tragic, hilarious, exhausting, and sometimes absurd minutes every week.  90 minutes in search of brighter future.  90 minutes of hope.

The castles of a new Catalonia

For hundreds of years, the Catalans have been building human castles. The close knit neighbourhoods of the villages and towns across the region, cemented closer still by vast towers of local men,women and children. The biggest and strongest laying the foundations, followed by the smaller, lighter bodies, finally raising the youngest to the top, 4 tiny fingers aloft to symbolising the Catalan flag, flying above.

The Castells is more than a dramatic and vibrant display, it is physical representation of community, family and the catalan nation. And now the new Catalunya – diverse, colourful, multicultural, is building new castles to match. Johanna is only 6 and her Somali parents can’t hide their anxiety as she wobbles ever closer to the top of the tower.  They’ve come along way in the search of a better future for their children, and are desperate that this one will reach the top.  Albert is 71 and the oldest known Castaller in region, he dreads the day when he can’t take the weight anymore.  His own house is empty but his human tower family is huge.    Ahmed had never heard of Castells when he arrived here 4 years ago from Pakistan, but now he bears the weight of his adopted neighbours on his shoulders, week in week out. The physical bonds beget emotional ones, and while Ahmed struggles with the Catalan language and his search of work, in his Castle, he feels he’s finally building a new home.

Maria is only 23 years old, but she’s been the victim of domestic violence for more than six years. Two months ago she finally left her home, but she has no job, money, qualifications or a permanent place to live. In 2009, Beatrycze was promised work in Spain as a model, but was forced into prostitution the moment she arrived here, and only now has had the courage to go to a local charity for help. Anna has been on and off heroine since her teens. Right now, she’s just got out of prison and has been clean for less than a couple of weeks. The statistics say it won’t be long before Maria is back with her violent partner, Beatrycze is back on the streets, and Anna is using drugs again, or back in jail or both. The Donas de Foc (Women of Fire), however, say something different.

They believe that all these women, and many more like them, deserve the chance of a different life, a chance to show their true talent and potential. And they think they can give them this chance, if they can just get them cooking! They run a restaurant in central Barcelona where all the employees are women like these. They give them 3 months of structure, guidance, training, experience, support, encouragement and the chance of a fresh start. It won’t be easy – the training is rigorous and tough from day one. It has to be. Kitchens are no place for the untrained or faint hearted. Not all of them will make it, some just can’t stand the heat, but many are focused, determined, skillful and creative, and desperate for the chance to leave their old lives behind. For them, a new future is burning bright right in front of them, and it’s a future as Women of Fire!

Catalonia and Scotland. Two nations divided by the length of a continent. United by centuries of shared experience. Battles for self preservation, debates on self determination and sensations of self doubt. Both peoples have carved out unique social, cultural, linguistic and political paths, distinct from the states that have controlled them. Yet for both, opinion remains fiercely divided on the next step. Both have created vast, vibrant, world renowned capitals, defying the huge but distant urban hubs that have for so long governed them. Both have chosen to look to each other for support, guidance and perseverance in their quest. And now, after so much, both lie on the brink of this monumental change at the same time.

Just what is it about these far away nations that has taken them to within touching distance of this historical moment, and at the same moment? Is there a common spirit or a common enemy? A shared motivation or mentality? Is there a broader, prevailing and strengthening wind of regional identity blowing in? Have the trials of one beaten the path for the other? Who better to answer these questions, than those who belong to not one, but both, of these ancient, stateless lands? The Glaswegian bar owner of central Barcelona, the Catalan Lecturer at Edinburgh University, the children of the Scottish Catalan parents. The Gaelic Student living in Inverness, born in Sabadell. The Caledonian Catalans.

This is a film about the character of two nations, through the eyes of characters from both of these two nations. Men and women. Young and old. New arrivals and old hands. Those ‘for’, and those ‘against’ . It is a snapshot of these two connected worlds and the people who have inhabited both. The film will get into the lives and under the social, political and cultural skin of this unique group of individuals to pose the questions that resonate now more than ever.

Throwing it all away

On the streets of Barcelona a scruffy old man with his scruffy old bike sharpens scruffy old knives. His out of work son looks embarrassed to be lending a hand, and depressed at the meagre takings to be split two ways. A young homeless Senegalese man pushes his trolley, scavenging scrap metal and unwanted TVs, as tourists quicken their pace to avoid his path. A grey bearded and wild haired vagabond rakes the bins. He’s not hungry. Not at the moment anyway. He’s outside the library and on the hunt for literature to sell from the pavements of Gracia. An unemployed kid turns empty beer cans into trendy ashtrays until the police get aggressive, destroy his work and move him on. For these people “recycling” isn’t a research programme or a vote winner, it’s just a way to get by.

“Throwing it all away” follows the day to day struggles of these unlikely environmentalists. Life can be hard, unreliable, and, at times, just plain odd. Rewards are few but hardened faces hide good hearts. There is dignity, humility, and more than a little humour in a job well done and a crust well earnt. Society’s upwardly mobile still give them a wide berth. Perhaps we should think again.

The INto INdustry Programme